Occupation-the job by which somebody earns a living, known nowadays as a career. In the old days, it was just paid work to support your family or if you were a farmer working the land to sustain your family. Most women didn’t work outside the home unless widowed, abandoned by their husbands or single. They were needed at home: to raise the children, cook the food, wash the clothes, and have more children. The list was never ending. If they had a job before their marriage, it was probably school teaching, nursing or as a domestic in someone else’s home. Without the wide spread use of birth control, married women were either nursing a new baby or expecting another child every two years or so. Pregnant females in public occupations were frowned upon. (Photo above left of my ggma Elizabeth Wilkins who raised twelve children and was a midwife. Photo below the Wilkins family, one son not shown died at age 3.) 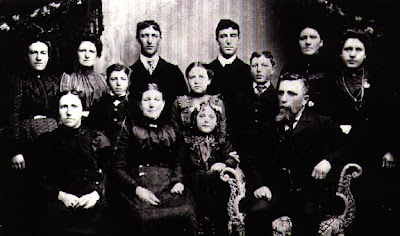 My widowed grandmother with five dependent children had to work outside the home. There was no social security or welfare available. With only a sixth grade education, she worked as a dishwasher and cook at Paxman’s boarding house in Silver City. She also took in washing, ironing and boarders. Later, she helped with maternity cases for the local doctor. Was this a career? Not really. Her days were filled with backbreaking labor for a very low wage. She was barely able to put food on the table for her growing family.

She did set an example of determination to overcome all obstacles. Her husband had been a miner before his death, and had no life insurance to leave for his family’s support. Mining was not a healthy occupation in those days, but it did pay better than farming. It promised riches if you had your own mining claim and found the mother lode. Wealth could be yours and a life of leisure. This promise brought some of my ancestors from England and back east to the West, as the news of the California Gold Rush spread throughout the world in 1849. Unfortunately, none of my ancestors got rich. My great grandfather, a would-be miner, found a better living in being a saloonkeeper as there was always a need for his services. (Photo above right of my ggpa Oscar Wilkins who was a farmer and ran a country store in Peoa, Utah.)

Looking at census records that list occupations, the usual one was farmer for the man, and homemaker for the woman. Some men were miners, saloonkeepers, blacksmiths, merchants, etc. Families were large and moms were too busy for an additional occupation besides being a homemaker. (Photo of my mom and me. She didn't work outside the home until she became a widow, then she worked as a telephone operator to support us.)
Posted by Lin Floyd at 7:00 AM