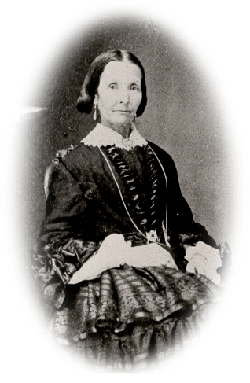 We have in our Mormon hymnbooks a lovely song Oh My Father written by an early LDS pioneer and poetess Eliza R. Snow (photo on left.) In her song she wrote... Father and Mother, may I meet thee in thy royal courts on high... Truth is reason, truth eternal tells me I've a mother there. Click here to hear the complete song.
Our first prophet Joseph Smith agreed with Eliza's words about a Heavenly Mother who exists as well as our Heavenly Father. They together created our spirit body which comes to this earth to give life to our physical body created by our earthly parents-mother and father. It all makes sense to me. But then I've wondered why we aren't told more about this Mother in Heaven in our church. Below is one explanation. It is certainly thought provoking.
David Paulsen and Martin Pulido’s article, “A Mother There” begins by tracing the idea that the identity of a Mother in Heaven has been kept hidden due to the sacred nature of her name, attributes, and character. There is a tradition within the [Mormon] Church that explains how Heavenly Father shields and protects Heavenly Mother from the profane oaths and blasphemies of this world.
Some scholars, feminist thinkers, anthropologists, and the like, find such a view offensive or at least problematic. They blame the Church for promulgating an attitude that places the divine feminine “in a role of a silent and unseen helpmate and mother” and a woman “not quite up to taking care of herself.” Some even complain that the Church has helped along the idea that the men [after resurrection who live worthy of exaltation, we believe families can be eternal] will be out having adventures creating worlds while the women stay home with the babies. “Our investigation leads us to conclude these claims are mostly false,” say Paulsen and Pulido.
Obviously there is a tradition that explains why the divine feminine is hidden, but the tradition does not originate from Church pronouncements. Also, the idea that Mother in Heaven and hence all exalted women will only fill a narrow childbearing role and never encroach on male privileges is, again, one of those mysterious myths that make the rounds in the Church but have little to do with actual revealed religion. In fact, statements from the First Presidency and other general authorities paint a very different picture; Paulsen and Pulido thoroughly culled the sources and compiled all these statements that, in a nutshell, say the following:
1. Heavenly Mother is a Procreator and Parent.
2. Heavenly Mother creates worlds. Future Eternal Mothers will be “prepared to frame earths like unto ours,” in the words of Brigham Young. Creating the earth is not some exclusive priesthood ordinance only the men get to do, but both men and women enjoy the “power to create and organize mortal worlds.”
3. Heavenly Mother is a nurturer, trainer, tutor, and teacher.
4. She is a fully exalted God of like stature to the Father.
5. She is the Queen of Heaven.
6. She interacts vitally with the Godhead (in fact there would be no Son without her).
7. Male Exaltation and Godhood is impossible without her.
8. She is a co-framer of the Plan of Salvation.
I have often wondered, if the “focus” issue plays a role in the sparse talk about the divine feminine. The great operational aspect to the plan of salvation in our lives on this earth is the Atonement. Come to think of it, not much has been revealed about our Heavenly Father either, accept through the Son. So the focus of our faith is on the power and efficacy of the Son’s Atonement.
But I must say that it only makes sense that the above eight points are spot on. To relegate women to a lesser role in the plan of salvation creates serious problems in Mormon theology. All things have their likeness on earth and in heaven, and as far as I can see women are every bit as smart and creative as men. And although their bodies obviously testify to a childbearing role, their minds obviously testify to a creative force that extends beyond childbearing alone. They will thus will be creators of varied kinds in the next life.
Source BYU's annual symposium.
Posted by Lin Floyd at 6:00 AM