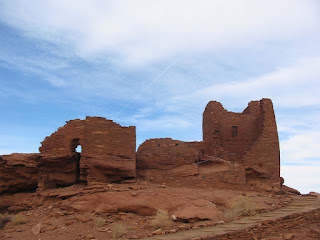 Now that we've discovered two grandmothers from the Cherokee and Choctaw tribes in my husband's ancestry, it makes the Native American culture part of our family. Wondering about how they survived living in primitive shelters and met the constant demands for food, shelter, clothing and security is intriguing to consider. (Click on photos to make them larger and read the signs below.) 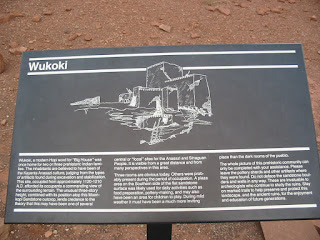 On the way home from Texas, we stopped 30 miles north of Flagstaff, Arizona at the Wapatki National Monument's ruins that have been preserved. Walking through their adobe dwellings, we talked about how they stayed warm in the cold winters at that elevation. What did they sleep on, just the cold rocks or did they make mats of weeds and use animal skins to cover themselves? Lots of unanswered questions, but they did survive...barely. Water was very scarce.. 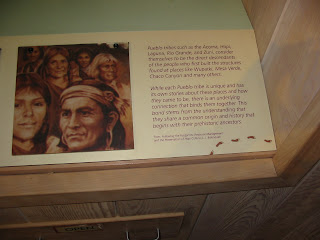 Was there a stigma for their later descendants to marrying a non-Native American? Did they ever see their Native families again after marrying and moving away? Many unanswered questions as their genealogy was oral and not written down. It is lost to us for now.
Posted by Lin Floyd at 6:00 AM