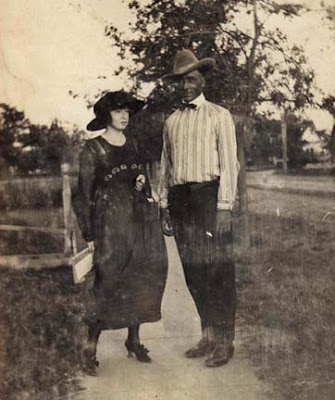 My husband has a great grandmother who we were told was part Indian. She lived in Texas and was able to get allotment checks during her later years from the tribe she belonged to in Oklahoma. Searching for her records for years we weren't all that sure what her name was or which tribe she belonged to. We had looked for her under the wrong name but we discovered her real name after talking to my husband's uncle Bill at Thanksgiving dinner.
This uncle Bill remembered hearing about his great grandmother and told us her name. Born in Missouri, her name was Catherine Bryant. She married John Knox Polk Weaver and they moved to Texas from Oklahoma. We still don't know if she was adopted or which of her parents or grandparents were Indian-usually the mother. We did discover her name in the Dawes Commission Index which was a registry of Indian people trying to reclaim their citizenship in their tribe to receive allotments from the government for their tribal land and mineral resources. She belonged to the Cherokee tribe according to this list. Now we will try to get more records and try to put her life story together. (Photo above is of Catherine's grand daughter Gladys Floyd-my husband's grandmother. With her is an Indian uncle named Walter Winfield who is definitely Indian and probably from the Cochtow tribe. So now we'll look for his parents.)
Genealogy is fascinating and habit forming. I've always loved jigsaw puzzles as a child and perhaps that explains my interest in tracing my ancestors.
Posted by Lin Floyd at 6:23 AM

Have you started writing your biography? family history