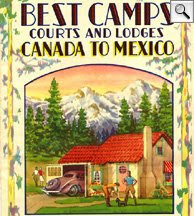 Motels were a new development as Americans fell in love with their automobiles, and started taking family vacations away from home. They needed an inexpensive place to stay overnight as a family while on the road. Thus developed a motorist’s hotel or motel which quickly replaced the more expensive hotels. With automobile travel gaining in popularity, tourists demanded cheaper easily accessible accommodations close to the main route.
Each little town had several motels located on Main Street while other accomodations were stretched out along the main highways. Most mom and pop owned motels consisted of a simple building with connected guest rooms in a L, U or I formation with a manager’s office facing a parking lot or they could be a series of separate cabins with common parking. Some had kitchenettes, flashy names and neon signs to catch the passing motorist’s attention. 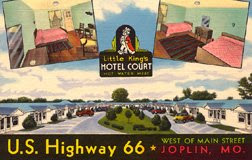 You can still see them in many old towns. Most have gone out of business and many are used as cheap apartments today. But in their heyday they were quite classy with names like: Last Frontier Motel, Trails End, Hitchin’ Post, Vagabond, and Sun N Sand. There was no need to make reservations ahead of time. They were very basic--just small rooms with an adjoining bathroom––no pools, spas or dining facilities like today’s chain motels. Just clean, neat and family orientated.
My husband’s grandma Big Momma had a map she ordered from Humble Oil Company that she had carefully studied and planned their stops each day to see the most interesting sites in each state they visited. What an adventure. They were seeing the U.S.A. in their own car, staying in motels and eating out every meal-a real vacation for the women. Every town had a family diner where you could get home cooked meals while on your trip which included: fried chicken, hamburgers, sandwiches, plus homemade pies and cakes, etc. There were few fast food establishments then. 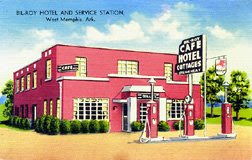 My husband recalls how they would get up early each morning from the motel where they were staying, have breakfast and start out by 6 am for the next leg of their vacation. By mid afternoon they would arrive at the next town to get a room about 3 pm before other tourists were stopping. After eating dinner, they’d go to bed early to be ready for the next day’s adventures. What fun they had!
Posted by Lin Floyd at 7:00 AM