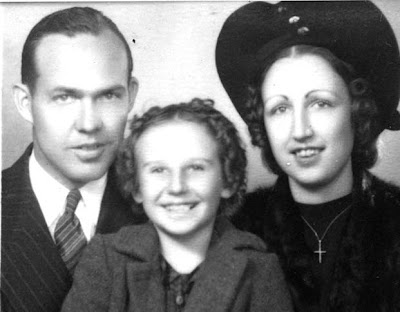 While in Texas recently, my husband’s family had a cousin’s reunion. He was able to reconnect with many of his kinfolk––some he had not seen since his childhood. Cousins are children of your aunts and uncles. They may be older or younger but they do share the same grandparents, and memories of attending common family celebrations. If you were an only child like me, cousins filled in for the sibling companionship that was missing in my life. Our extended family lived in the same area and gathered together for most holidays. The cousins saw each other quite a bit. (Photo above of my cousin Jody who just turned 75, and her parents my uncle Les and aunt Esther.)
My husband’s cousins range in age from those in his generation to others who are younger and older. Some are even cousins of his parents. A unique situation has brought my husband’s family together. One of their older cousins married, had no children then divorced, and moved away. When this man died in Oregon recently, the state found he’d left no will or heirs so they determined that his estate should go to his cousins. They became his next of kin since both his parents were deceased.
Well, that makes for an interesting genealogical problem of finding these cousins. Tracing his family roots back to Texas, a lawyer was able to locate a relative still living in the same area. Fortunately, she happened to be an avid family historian and was able to contact all the living cousins and descendents of those who had died. A reunion was called to gather more information on this long lost relative who broke all contact with the family after he moved away. I think he would be surprised to know all his earthly possessions will now go to these cousins that he left behind in Texas.
I had this same situation in my family with a widowed great aunt in Ohio who had no children and left a will leaving her estate to her nieces and nephews. All counted, she ended up with 43 living nieces and nephews plus 134 descendents or grand nieces and nephews plus a few step nieces and nephews. It got to be quite a process to contact them all. Each person received a very small inheritance after it was divided. I guess the moral of this story is to have a clearly defined will defining who your heirs are and/or stay in contact with your cousins! (Photo above of my cousin Ruth and her parents my uncle Norman and aunt Gladys.)
Posted by Lin Floyd at 7:00 AM