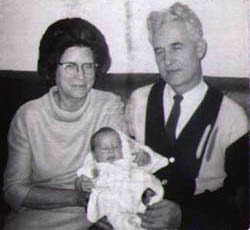 As our first son grew and developed, we carefully recorded each first: rolling over, sitting up, standing up, walking, first word, first smile, first tooth, etc. All the details were written down in his baby scrapbook, then letters and photos were shared with doting grandparents who lived many states away. Other firsts would come: first fall, trip to the doctor for immunizations, tantrums, use of the word “no,” and other unmentionables like playing in the toilet or running around naked. Later babies would not get the same amount of attention as our firstborn because life was too busy as more children were added to our family. (Photo of our firstborn with his Hatch grandparents.)

Interestingly enough, childhood diseases came our way despite umpteen immunizations. My oldest son got the chicken pox and gave it to me when I was 7 months pregnant with his brother. That wasn’t fun. Seems that I, as an only child, had somehow avoided many common childhood illnesses. I quickly discovered that moms are expected to be trained nurses. Knowing how to diagnose and treat a wide variety of diseases. Plus caring for and cleaning up after sick members of the family in spite of other responsibilities was my job. 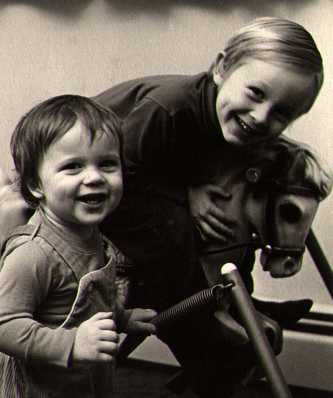 Eventually with three active sons, we made at least one trip a month to the ER mostly for stitches usually on the head or face of my rough and tumble boys. Just a simple swing at the playground could turn into a speedy and expensive visit to the hospital. Ever try to hold a wiggly little kid down who definitely doesn’t want anyone near with needles as the doctor tries to stitch his cut back together? It’s not easy as you try not to cry as your child is hurt and screaming to the high heavens. (Sons #1 and 2-Daniel and Frank.)

In my day, they had a cradle board to wrap around the injured child to keep them still. I can remember my second son who innocently fell off the seat at a picnic table and cut his lip. Of course we rushed him to the hospital and had a special plastic surgeon put in the stitches above his lip. That was accomplished but in returning weeks later to get the stitches out, my son would not hold still and reopened the wound. I began to dread each day wondering who would fall on the coffee table or going down steps. You can’t child proof your life.
Posted by Lin Floyd at 6:00 AM