OUR VISIT TO THE DOCTOR
By Heather Hatch
Once upon a time there was a family of six and they had four kids. They were going to the doctors because the kids were getting their yearly shots for the flu. When we arrived at the doctors we had to decide who would go first. Nathan said he would go first. So we were waiting for a little bit, then Nathan came out. I said I would go next. My dad came up to me and told me that James should go next because he wasn’t getting it on his arm. He was getting a shot on his leg. So I finally said James could go next. (Photo below: l-r Emilee, Nathan, James and Heather.) 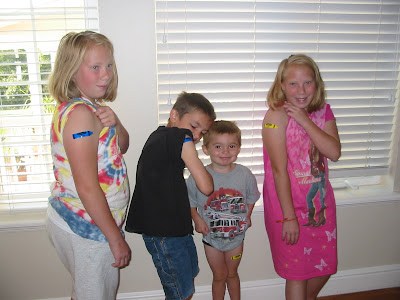 We waited but we heard crying. At that moment we knew James got his shot. Daddy came out and got us. He said that Emilee and I could go back to the nurse and get our shots. I just started walking and Emilee followed be hind me. When we got in there I jumped on the bed. She told me to be calm and just to keep on playing my game. When I got my shot I felt a tiny pinch and then it was over. It was time for my sister to get her shot. I left and I heard Emilee start to cry. But than mom came out and asked me if Emilee could use my I pod. I said it was ok. She went back in. Emilee came back out and I knew she got her shot. After that we went out to dinner. We went home and told grandma that we got our flu shots, and showed her our band aids. That’s all I have to say.

So as the days go on I can’t help thinking about our next shot which is the new flu called swine flu when it comes around in October. We will have to get it. I wonder what kind of band aid I will get when we get our swine flu shot. When it comes around I think I’ll be scared or excited. I don’t know which but right now I’m excited for it, but not happy about the pain in the shot to go in my arm. Because after the shot you feel pain when you move your arm. But you get a sucker after the shot. That’s pretty cool.
"i hate to ruin the party." "but i final got it. i did i. got the swine flu shot i'm the girl of braveness
it did hurt a little at first but not that bad".
i could feel it going in to me. it felt so weird i love december it rocks.