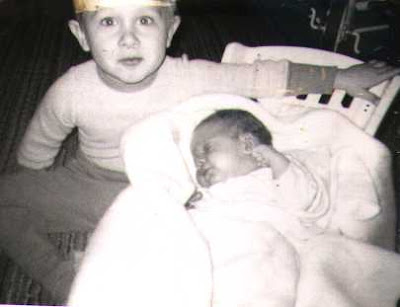 A year or so after I’d weaned my first child, I discovered I was expecting child #2. Although I wasn’t sure I was up to the challenge of nine months of pregnancy and childbirth again, I didn’t want my first son to be raised as an only child as I had been. Now the problem was to get my toddler potty trained so I didn’t have two children in diapers. That was easier said than done. No one prepares you for this experience before mother-hood either. I found it was extremely time consuming to potty train a child or a pet. And I’d never done either before. Time to go back to the Dr. Spock books plus ask questions of other inexperienced first time mothers like myself. (Photo-my oldest son Frank was almost 3 when his brother Daniel was born.)
At that time there were no disposable diapers, unfortunately they weren’t commonly used in the 1960s. So I had the memorable task of rinsing out any soiled diapers in the toilet, then soaking them in a covered diaper pail until washday. Modern mothers certainly are missing a unique experience, as few today even know that cloth diapers once existed. They are busy contributing to the filling up our many landfills.
My cloth diapers had to be washed, then dried on a clothesline. I know most moms today don’t even know what a clothes line or pins are for other than closing off potato chip bags. After air drying outside unless you had a modern electric or gas dryer, diapers had to be meticulously folded to fit the ever-changing size of your baby’s bottom. 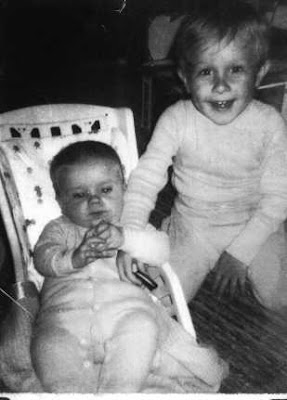 I was motivated to get my toddler out of diapers, but discovered that potty training techniques was dependent on me being an observant mother and spending all my waking hours asking my son if he wanted to sit on the potty. I think I was the one being trained. What had seemed fun as a little girl playing with my dolls and pretending to be a mom was now only hard work and tedious.
Babies grow and change so quickly, that many sets of clothing for different sizes were required. Seems I was always changing my son’s clothes for some reason or other, then they needed to be washed too. Of course all these clothes when out grown were carefully stored away for the next little one. (Photo-Daniel and big brother Frankie-it helped having all boys to pass down their outgrown clothes.)
Posted by Lin Floyd at 6:00 AM