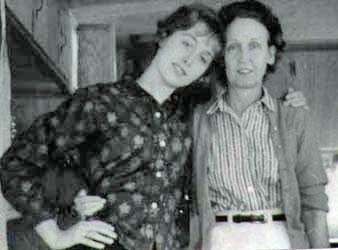 Well Sunday December 2nd, 2007 would have been my mom's 90th birthday but unfortunately she died last Jan 15th from a brain tumor that was discovered just before Christmas. I don't want her special day to pass without acknowledging all her love and support during her earthly life. She was widowed at age 27 when my father was killed in a private airplane accident.
Left alone to carry on with a young daughter (me) age 5 to raise, she went to work immediately as a secretary for the Union Pacific Railroad depot in Milford and later went to secretarial school in SLC then became a telephone operator in Eureka Utah and in California after our move there in 1950. She was a single parent for many years and didn't remarry until I was 17 years of age. Because of her, I was able to graduate from college, marry and raise a family. She was always there to support and help me and my family through all of her 62 years of mothering, grandmothering and great grandmothering. Her memory lives on in our hearts and I know we will meet again one day. Happy 90th Birthday Mom! You are missed.
Posted by Lin Floyd at 8:42 PM